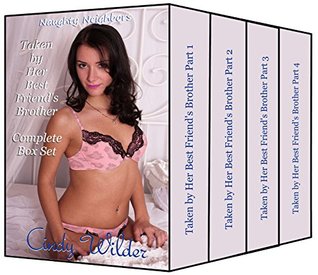 Warning: This story contains content which is intended for readers over the age of 18.

Rachel was away for her first year in college. She had remained a virgin all through high school and was tired of waiting for the right one to come along.

Brad was her best friend’s brother and two years ahead of her in school. He was tall, muscular, and extremely sexy.

Rachel had a huge crush on Brad when she was younger. He was the one who kissed her for the very first time. When she went to high school, she saw a side of him that she didn’t like. He was arrogant and extremely cocky. Being the star of the team gave him many advantages, and those advantage went straight to his head.

When Brad left for college, Rachel was able to avoid seeing him for two wonderful years. She was thrilled and had no intention of seeing him anytime soon. Home for the Thanksgiving holiday, Rachel hoped she could continue to avoid him.

What if he wouldn’t let that happen?

Would all of her feelings come rushing back, or would she remember who he really was?

When faced with the chance of being with the only guy she ever loved, would she give him her virginity, or would she walk away?

Rachel left for school before Brad had a chance to see her. She couldn’t face him after their hot encounter the night before. If she got away from him, she knew she would be able to get back to normal and forget about what they had done. That was exactly what she needed.

Brad had other plans. He began to call and text her each night, and she found herself looking forward to their talks.

How was she going to get him out her mind if they kept talking and flirting with each other?

Was he playing games with her, or had he really changed?

One month later, she was going home for Christmas and had no idea what he was going to say or do. Her best friend was his sister, and that made everything so much harder. She didn’t want Karen to find out that she had lost her virginity to him.

When Brad showed up to pick her up at the airport, she knew she was in trouble. He wasn’t going to make the week easy for her.

What would Rachel do when her best friend requested that she go on a double date with her?

How would Brad react?

Would Rachel be able to get through the week and back to school with her heart intact and neither of their families finding out about what happened between them?

Rachel made it through Christmas and was back at school without either family finding out about her relationship with Brad. It would be three months before she could see him again. She had no idea how she was going to wait that long.

Brad continued to call and text her each day. They couldn’t wait to see each other again.

When something happened that would change her life forever, how did Rachel handle it?

She knew that pushing Brad away was the right thing to do for everyone. It was time for her to think about the future and make sure that he followed his dreams. Rachel knew it wasn’t going to go over well that she wasn’t going home for spring break.

After a long day of work, Rachel answered the door to an unexpected visitor.

How did her best friend react when she found out Rachel’s big secret?

Could Rachel get to Brad before his sister ruined everything?

Rachel had everything figured out. She was going to raise her baby close to home. Brad was going to follow his football dream.

Yeah I can see this happen a lot. Will they work things out? Will she keep ignoring him? Will there be consequences to their night? Will he go after her?

They talk all the time and meet up again over Christmas break. They reconnect and talk and have a few issues. They have some amazing times.

She gets back to school and learns that she is pregnant instead of calling him and letting him know she decides to push everyone away and try to do it on her own. She doesn’t want to ruin his life she wants him to finish school and follow his football career. She doesn’t give him a choice.

Her bff hunts her down and learns that she is pregnant. She decided to go and tell him. She surprises him and gets the wrong idea. She tries to runaway but he won’t let her. When he finds out he is so happy. They go and confront the family and she is surprised that his father wants to kick the guys but who knocked her up. When her man says thanks dad I am glad you care enough to want to kick my ass since I am the father. He then proposes right there and then.

This was a vey moving and loving story showing that you can make mistakes and jump to conclusions but to keep an open mind.