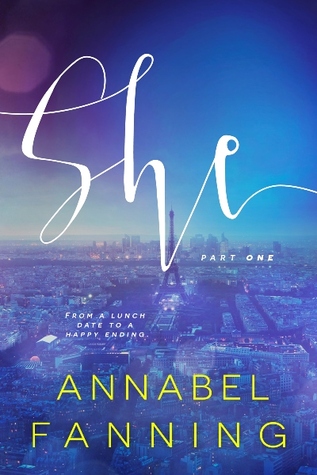 115,000 words in length. For readers 18+ over only. Contains explicit sexual content, a hero that will make your heart flutter, and a heroine who will make you laugh out loud.
The She series is designed to be read and enjoyed in its entirety. Part 2 will be released on October 1st.

LOVE and SEX at once, is a powerful combination.

Logan Leary is a reformed bad-boy who moved to the city of love fifteen years ago to start his life over. Now he owns one of Paris’s most successful companies and leads as seemingly charmed life. There’s just one thing missing: Gemima Samuels.

Gemima Samuels moved to Paris with her down-on-his-luck boyfriend eight years ago. She coasted through life (in that annoying way we sometimes do) until her boyfriend cheated on her and life dealt her a wake up call. Choosing to start afresh, Gemima ends her relationship and quits her job before being hired by the most prestigious interior design firm in the city.

A supposedly inconsequential lunch date turns out to be the start of something phenomenal that will change both of their lives forever.

“Everything about Logan is new to me. Everything. He is the difference between watching television in black and white, verses watching it in colour: he adds dynamic and depth and stimulation when my life used to be so dull.”

For readers 18+ over only. Contains very explicit sexual content, and romance that may cause heart flutterings.

I liked the story allot but their where some areas that where a bit slow or just to much extra information that could be left out. I like the concept and loved how he floored her ex in one hit for disrespect for her. Their relationship is a joy to see unfold. I can’t wait to read part 2 to see what happens next. I love his surprise for her will he feel the same when he gets his? will they keep going this strong?