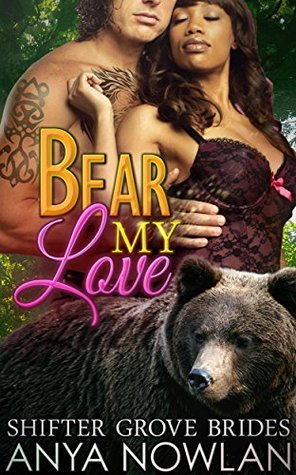 Keesha Bailey has had enough. Enough of the big city. Enough of the shitty boss. Enough of the weak men. A woman can only take so much and Keesha knows she deserves better. So, when the smart-mouth African American paralegal gets pushed a step too far, she knows its now or never – grab life by the scruff or stand by watching as it passes her by!

Battle has done a lot of things wrong and not a lot right in his life. But the moment he saw Keesha Bailey on SassyDate, he knew he wanted to do right by her. When she shows up in Shifter Grove, all curves and attitude, the werebear with a troubled past has to clean up his game and do it fast. Only what if his past doesn’t want to let him go? And can he, a lumberjack bear with a dark past, really keep up with a big city woman?

He knows one thing – he sure as hell is going to try. And nothing will stand in his way when he needs to keep his mate safe

This s book 4 in the series. I read it as a standalone book which you can do. The story was sweet. The bear was hiding from his past. He meets his potential mate on a dating site. He lies about his past but when he feels that’s it caught up with him he tells her the truth. She stands by her man. They get attacked and he gets help from an unlikely source. They get engaged and plan on a life together. What will happen in the next book? I cant wait to find out.