What will happen when two shifters fight — over a love that has been ordained, and one that is forbidden?
Jace moved in with Fiona and her father when she was fourteen. Tall, lean, and hotter every day, he caught Fiona’s eye on day one, and she has had a crush ever since. The problem is, Jace has never looked at her as anything but a friend.
On Fiona’s sixteenth birthday, her dad announces she is going to mate a shifter she has never met when she turns twenty-one. Zane, though cute and muscled, is arrogant, older, and not at all her type.
One night, Jace finally sees Fi for the woman she has become. In a moment of weakness, he succumbs to her request for “just one kiss.” A mate’s addictive taste is something neither Jace nor Fiona can deny.
Caught by a secret past, Jace believes he will never deserve a woman like Fi. However, Fiona harbors a deep dark secret of her own, a secret that may change all of their lives.
Pepper Valley: A town where shifters, vampires and other creatures are a part of society.
They are caught … and Shifted For Love.” 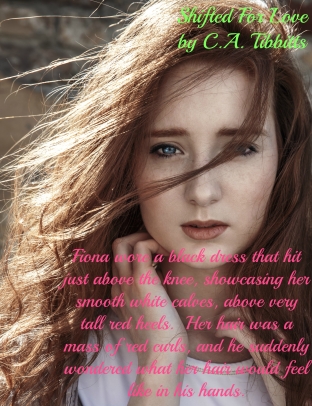 “Probably as much as it hurt me,” Jace admitted. He pulled her in for a hug, ignoring the way she batted her fists on his chest in irritation. She stared up at him, fire in her eyes, and he just wanted to kiss her.

His mouth was on hers before either of them could say another word.

She surrendered, going limp in his strong arms. His tongue swept across her lips and she opened to him, lost in the taste she had craved for so long. Her hands moved to his shirt, and he pulled away long enough to tug it over his head before continuing those amazing kisses. Her hands slid along his back, softly touching the scarred flesh.

“I want you, Fi,” Jace grabbed the hem of her dress and lifted, yanking it over her head. One sparkling comb was left dangling on the left side of her hair, and he watched her grab it and toss it across the room, unfazed. His tongue traced his bottom lip as he stared at the matching black lace bra and panties.

She reached for his belt and roughly tugged him closer, unfastening it and his pants, leaving him completely exposed to her gaze. She didn’t stare at his scars or look away in pity, she just grabbed his length and teased at the head with one bright green thumbnail as he stepped forward, leaving his pants behind. He groaned as he firmed up under her touch. He hoped not to disappoint her, since he’d never been with a woman. She was the only woman who had seen him without a shirt since his mom. The way she touched him, unashamed, he had to wonder if she’d ever been with a man, or men. He didn’t care. By the time he was done with her, she’d forget that other men even existed.

Hi! I’m an author from the Midwestern United States. I’m an avid reader of anything romance! I’ve worked as a travel agent, nursing assistant, and a paralegal before chasing my dream of full-time writing. I love to travel, swim, cook, and I’m more than a little addicted to a certain social media website…
Currently, I write paranormal and science-fiction romance. My plan is to branch out in several romance sub-genres, but my books will always end in the infamous Happily Ever After.
Always hot, always sexy, my male characters will protect their women at all costs, and my female characters will be…I like to call it “feisty.” I believe every story and character should be unique, and it’s something I always strive to do.
Reading should be an escape from everyday life, so I hope you enjoy my version of a vacation for you!

Fun Facts about me:
1. I love birds! I have one (a parakeet).
2. I’m double-jointed, which led to teasing as a kid (which I also found funny)!
3. I have a shoe addiction! Mainly embellished flip-flops, but other kinds too (not heals, I’d break my ankles).
4. I missed a college 4.0 GPA in the very last semester when one professor gave me a B (still upset about that!)!
5. I am very OCD about certain things (see #6).
6. I have an extensive DVD/BluRay collection and it has to be kept in alphabetical order!
7. My favorite vacations involve a cruise. I’ve been on 15 so far!
8. I’m quiet and sort of shy until I get to know a person.
9. I’m quick witted and believe sarcasm is my best friend.
10. I hate hot weather.

This event has been organized & hosted by