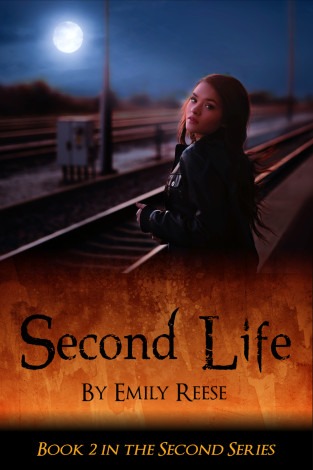 Blurb:
She thought her trials were over…

When she ended the Second Life of the serial killer turned vampire responsible for her own transformation, Claire assumed she’d be able to move on with her life. The “man” was a literal monster, and the world would be better off without him.

If only the rest of her world shared that opinion.

With the help of new allies Claire must race against the clock to prove her acts justifiable… or risk following her tormentor to the grave. And as for Mike, whose rescue was the catalyst for her current troubles, what kind of life will he awaken to? And will he ever forgive her for her actions that night?

In the thrilling sequel to Second Death, the story of Claire Wallace and Mike Monroe continues to unfold, immersing readers in the complex and often brutal world of the supernatural. A world that exists all around us.

The mood is different than before. Whereas last time, I interviewed the ensemble of Second Death, we’re doing solos this time. And it’s not like I’m ever going to be able to get them all back into the same room anyway… not after the way I ended things. I try to smile and ignore their stiff posture and lack of eye contact.

Me: Mike, do you want to go first?

Mike: I guess. He rises with a shrug and we enter a private room. Just two chairs, a fire, and a heavy silence between us.

Me: So… how are you… after what happened at the end of Second Life?

Mike: You really want me to answer that? Not worried I’ll give away all your master plans?

I sigh and rub my brow.

Me: Look, I know you’re not happy with me, okay? But when people finish the book… they’re going to want to know, are you okay? How are you handling it all? A lot’s happened.

Mike: I’m fine. My shoulders slump in defeat and he sighs, loosening up ever so slightly. I’m coping, alright? As well as can be expected, considering.

Me: Thank you for that. So, I have a few questions, kind of like last time. I’ll just run through them, yeah?

Mike: Hmm… I’m not as patient as I should be. But everybody could probably say that. I don’t really… talk about things as much as I should, you know?

Mike: He shifts uncomfortably, That’s one instance. And honestly, I don’t even how to sum that all up anyway. I guess I wish I was more intuitive about myself, so that I could feel more comfortable sharing it all with another person… he rubs his chin and smiles ruefully. That got deep fast.

Me: It’s supposed to; the questions are made for that. What trait do you dislike most in others?

Mike: Arrogance. It just gets right there under my skin… and then I punch something.

Me: laughing, Note to self. What is your greatest extravagance?

Mike: With all that’s happened, and all the messed up shit with Claire, my work now at the compound in New Orleans… I’ve come to depend on her a lot. I’d like to give her a more defined sense of our relationship. She deserves it, she totally does. And if I can’t right now, then it’s unfair to keep things going, keep calling her and texting her 80 times a day. But I just can’t not. She’s the one person outside of my life in New Orleans who knows everything. She’s the only one I can talk to about everything. I can’t give her up.

Me: Wow. I see. I guess you’re more serious than I realized.

Mike: Try not to ruin it for me.

Me: I want to be pissed at him, but he’s right. If I wanted to, I could take everything from him… not that I do. I decide to ignore the jab and move on. On what occasion do you lie?

Mike: Next question. I don’t like lying, and I don’t want you to think of reasons to make me. When I huff at his continuing ire, he flashes me the dimples and his lady-killer smile, the one I fell in love with back when we started this whole mess. Sorry, Em. Give me something more fun and I’ll give you a better answer.

Me: Okay… I scan my list for something lighter. Here we go! Which literary character would you like to meet? Like you can hop into their story and spend some time with them in their world.

Mike: Yikes… give me a minute. Okay, I’ve got something, someone from your bookshelf. I lean forward in anticipation and Mike does the same. I wanna go hang out with Tohr.

Me: Tohrment? From the Black Dagger Brotherhood series? Tell me.

Mike: It’s like this… his voice lowers conspiratorially and I find myself barely breathing. I love Tohr. He’s been through hell. Like, trials of Job hell. And I get that. Both of us went from an idyllic life to utter chaos. He’s been through so much shit, but then, he fought his way back. All the way back to being happy. He was the one everyone looked to for leadership; a steady hand, the logistics guy. Now, after everything, he’s back to that.

Me: And what do you want to do once you meet him?

Mike: Ask him how he did it. Mike sits back, the glimmer of excitement fading from his eyes. I could use the advice.

Me: I see. I sit back as well, the mood once again somber. Well, only one more question then. What do you want to ask me?

Mike: How much time do we have?

Me: Not much. These interviews might be too long already. Ask me one question, anything you want.

Mike: After a long pause, Am I ever going to be happy?

Me: The question hurts, as does the weight of the responsibility I have here. Yes, Michael. I promise you, you’ll get your happy ending. I can’t promise you that you, or anyone, will make it to the end of the series. You know as well as I do that you all control the story as much as I do. But I can guarantee this: you will be happy, and around long enough to enjoy it, so that if you do die, you’ll die content.

We’re both quiet for a moment, my assurances stealing any thoughts we might’ve voiced. Finally, Mike looks up at me, his eyes reminding me of his first scene with Claire.

Mike: So, no matter how long it takes, as long as I stick it out… it’ll be worth it?

Mike: He nods and extends his hand for a fist bump. Then I’m in it to win it; let’s do it.

Me: I bump his knuckles with my own and smile, proud of the man he’s turning out to be. In it to win it. Now go get Claire for me, will you?

Mike: He stands and shakes his head, Sure. Good luck… she’s pretty pissed.

Leaning back in my chair, I wait, thankful I can keep her from throttling me… barely.

Emily Reese graduated from the University of North Texas with a degree in Communication Studies, which makes it a little easier to write dialog… when her characters are cooperating. She lives out in the middle of nowhere with her husband, their two daughters, two cats, and a Pug. She loves smushed faced animals, the creative power of Junior Mints, the glory of naps, baking, video games (especially BioWare,) and the sound of her girls giggling together. Her works include Second Death, Second Life, and Servant of the Three coming September 2016.
You can find Emily at