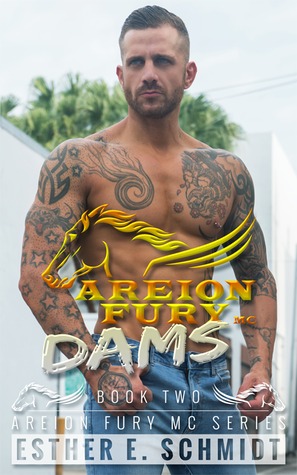 Dams is a man of few emotions, apathetic if you will. His past carved him into the man he is today; a strong body and mind but lacking the desire for connections beyond his brothers. He’s stoic. Unflappable. You can throw anything at him and he will divide and conquer making him the perfect VP of Areion Fury. He’s got everything he needs in life, or so he thought. On a backside road in the middle of nowhere he finds what seems to have been missing all his life.

Nerd prefers the digital world rather than the real life version. There’s a reason she’s a genius with a computer. She’s a lot like them; a lot of memory, a hard drive and no emotion. Stuck in the past with painful memories, she keeps the contact with Areion Fury digital for a reason. She hates lying, cheating bikers. A family obligation pulls Nerd from behind her computer and a chance encounter pushes her further from her comfort zone.

Will Nerd let her past determine her future? Not if Dams has anything to say about it. While Dams is marking his territory, danger is circling Nerd’s family business and threatening her safety. Can Dams handle the threat before it takes away everything he never knew he wanted?

This book was great. We follow up on Dams and Nerd. Will they realize they are perfect together? Will they get over the trauma of their child hoods? Will she learn that not all men are the same? Will she let anyone get close? Will we see more of Blue and Lynn? This story had quite a lot going on but the ending was mean to leave it like that. Now I’m on the edge of seat till the next book comes out.