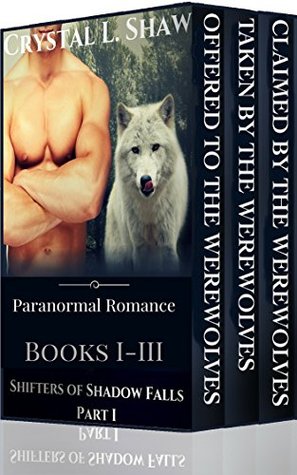 ARC Received From: I OWN A COPY

Shifters of Shadow Falls Bundle – contains All three books in the serial.

Every year Shadow Falls offers its young women to the werewolf shifters in exchange for the town’s protection — there’s no refusal.

Ariana and Lizie grew up relying only on each other, finding their confidence and happiness in one another. Today of all days, they’re relying on each other for strength. Today they are being presented to the Shadow Falls werewolf pack. It’s law; Ariana and Lizzie have no choice. The werewolves haven’t taken anyone in decades and the pair were sure this year would be no different. But as the day dawns, Ariana can’t shake the uneasy feeling that something isn’t right.

Devin, the Alpha, may keep his emotions in check when it comes to his pack, but he can’t help the grin pulling at his lips when he sees his mate. His confident, strong-willed mate, Ariana, doesn’t bow to anyone, but he’s determined to win her over.

Betas Caleb and Dom have an even harder battle to fight with their shared mate. Lizie may seem wild and feisty, but she’s terrified and for good reason. They have no idea that their mate has a secret she’s been hiding for years. A secret so dark, she’s never told a soul. But there’s nothing she can hide from her mates.

Meanwhile, Veronica has thrived with control and aggression. The badass vampire keeps everyone at a distance – for good reason. Yet her mate seems to think it’s all a game and that her past isn’t dictating Veronica’s behavior. She has to give up control to let him claim her, but how will Vince, her sweet, obedient pup (who’s really a barely-tamed, massive, hulking beast) react when he discovers her control has been a guise for her pain?

GET A FREE SNEAK PEEK AT THE SHIFTERS OF SHADOW FALLS SERIES by subscribing to my newsletter:http://eepurl.com/bN7tOz

We meet Ari and Liz. They are of age to go to the sacrifice. They are a bit nervous and Ari is freaking out. As there time comes they are both picked. Can they come to terms with what is to happen? Can they accept it? Will Liz finally face her past?

We meet Veronica and her mate. We follow up with Ari and Liz and the fallout from what happened? Will Liz learn to trust her mates and move past her past? Will her wolf come back? Will Ari find her place with the pack? Will Veronica mate her wolf? What will happen during the mating?

We pick up where we left off. Will the pack find who is drugging the vamps? Will the girls find what they need? What is to happen next? Don’t want to give too much away.