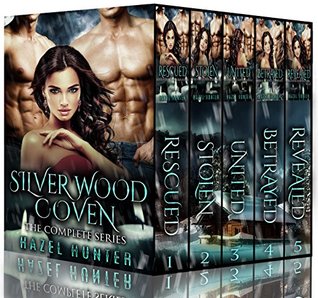 What if you had no memory, not even of being a witch?
“Falling in love with the series again and again.” “Hang on for this one, it’s going to be a bumpy ride. ;-)”

Templar Michael Charbon has been watching the young witch for months. Homeless, beautiful, and living in Central Park, she seems to charm everyone she meets. They shower her with kindness, and yet he never witnesses magic. Only when he rescues her from a rapist, does he understand why: Summer has no memory, not even of her real name. Though he barely resists her inexplicable pull on him, he would gladly break his vows to make her his own.

Magus Corps Major Troy Atwater is surprised to hear from Michael. But their long past together puts Michael’s word beyond doubt. Troy collects the beautiful, young witch from the Templar, before her strange attraction drives half of New York wild. A powerful warlock in his own right, Troy manages to veil her seductive appeal, so that he and the coven can help her. But a passionate bond quickly envelopes them that goes far beyond her charms.

For her part, Summer’s head is swimming. With barely a memory, she can hardly comprehend the ancient world of Wiccans and Templars. More than that she finds herself torn between two very different men. But as the extent of her powers reveal themselves and her deadly past returns in painful snippets, she finds that she isn’t meant to choose between Michael or Troy. She must have them both.

Just as Summer settles into her new life with the Silver Wood coven, her world is upended. Templar Michael Charbon inexplicably kidnaps her from the very place he’d sent her for safety. Though still suffering from amnesia, Summer has learned of the long enmity between Wiccans and Templars, and tries everything to escape him. But as he thwarts her every attempt, the fierce desire that has always bonded them surfaces.

Still reeling from the brutal attack that has left Templar Michael Charbon fighting for his life, Summer and warlock Troy Atwater flee with him from New York. As they head to the Silver Wood Coven for refuge, they know two things: they will not be welcome, and the coven harbors a traitor.

As the winter solstice gathering draws closer, and the other covens converge, the stakes couldn’t be higher. But when Summer’s memories begin to return, she glimpses her terrible purpose. Not only will she need to summon her power and her courage, she must ask the ultimate of her two men.

In a breathtaking vision shared by the three of them, Summer, Michael, and Troy finally learn the truth. But not only is Summer’s birth name revealed, so is her heritage and the real purpose of their passionate union.

As deadly forces close in on the winter gathering, Silver Wood coven has never been more vulnerable. Templars intent on finding the Emerald Tablet will stop at nothing to get to Summer, aided by a traitor in their midst. When the traitor finally reveals themselves, the depth of their vicious intent becomes clear.

We meet a woman who has no idea who or what she is. A Templar has found her and instead of killing her or taking her to his order he calls the Wiccans to rescue her. Will he really let her go? Will the Wiccan who rescues her be able to resist her? What will happen next?

We pick up where book 1 left off. Michael is fighting his attraction to Summer. But will he succeed? Summer is coming into her powers more. Troy finally finds her but can he handle what he sees? Will they survive the altercations that come? Will the covens be warned? What will happen next?

We pick up where the last book left off. We see how they are struggling with there relationship and how things are to progress. Summer comes into more of her powers. Will the guys ever learn to work things together? Will the coven accept Micheal? What will happen next?

We pick up where book 3 left off. Gideon finds his way to the coven but will he find the green witch? Will Summer learn any more about her past? Will Aileen learn the truth of her parentage? What will happen to Gideon? Will Troy make up with his father and brother? What will happen next?

This is the final part. We continue from where we left off in book 4. We finally learn of what the curse is. We learn what she is. We learn why she lost her memory. We learn the truth. There is so much that happens in this book that you get lost in it then it ends and you are like NOOOOOOOOOOOOOOO. Will we see them again?