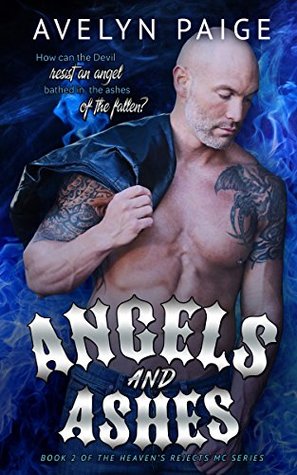 Left alone to raise a family, widow Darcy Kyle’s life has spiraled out of control. When secrets about her husband’s past emerge, Darcy is forced to confront the fact her husband’s fatal accident may, in fact, have been deliberate. Forced to sell her soul to the Devil himself, Darcy must uncover the truth of her husband’s accident…before it’s too late.

Cast into Hell, Raze has given his life as President of the Heaven’s Rejects MC, but what good is it when he can’t protect the people he cares about? His brother’s death, his wife’s betrayal… it’s too much for a mere mortal to handle. Luckily for Raze, he is the ruler of this Hell on Earth. But even the Devil has a weakness, and when Darcy Kyle sticks her nose in the club’s business he finds himself questioning his loyalty to his brother’s memory.

How can the Devil resist an angel bathed in the ashes of the fallen?

WOW!!!!!! There is so much going on in this story. We first meet Darcy and Jagger. Then she loses the man she loves and takes it out on his MC while she tries to learn the truth of his death.

Raze is dealing with the fallout of his best friend’s death and the betrayal of his ex-wife. He is learning the truth behind his death and more disturbing news about what his ex was up to.

As Darcy and Michael are trying to deal with their attraction to each other and the feelings of betraying Jagger. Can they move past all that and see that they need each other? Can they accept the love they both need? Can they make each others life better together than separate?

What will happen next?