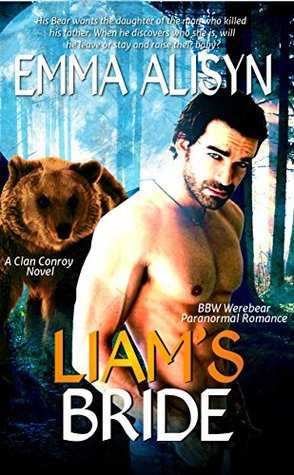 Curvy Meredith is hiding in plain sight. A gardening teacher for troubled teens, she needs the new owner of the old YWCA building to renew her lease. Her non-profit after school program can’t fund a more expensive location. Steeling herself for a confrontation, she discovers the owner is Liam Conroy, the Alpha Bear whose father was murdered fifteen years ago…

Liam doesn’t know his mate is the daughter of his father’s killer. All he knows is he wants the gentle, courageous beauty- and that she is an answer to a problem plaguing his Den. Only he senses she is hiding something from him, something that could threaten their fledgling matebond.

When he discovers her deception, will he reject her… and their baby?

WOW!!!!! This book was great. We meet Liam and Meredith. Mere is dealing with the after affects of what her father died when she was a child. She blames her self. She has made a life of caring for children to atone for what she feels is her fault. Liam is the Alpha of his clan. The Clan has decided that they need to mate with humans. When they meet they are attracted to each other. Will she let her past keep them apart? Will he fight it or accept that he has found the one? Will they be able to work past their issues? Will they be able to Help Brick?