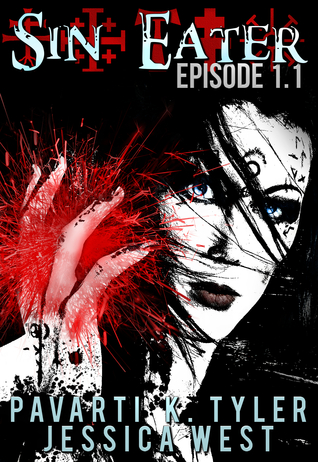 From Award-Winning Author Pavarti K. Tyler and Speculative Fiction Author Jessica West, comes a Dark Urban Fantasy serial about evil, and the next step in its evolution.

A Sin Eater who battles demons for souls
A Priest who must protect what he most desires, even from himself,
A rogue Romani mortician with an attitude, a secret, and a powerful weapon,
And a Secret Order of the Church who knows more than they’re saying…

Born into a world rampant with demon possession, Nik struggles to keep Hell’s hordes from consuming the world, but he grows weary of the constant battle against sin. Evil grows stronger as more souls are lost. With each new possession growing increasingly violent, Nik fears he may be losing the war.

When Nik confronts a demon he can barely defeat, he reaches out to the only man who can save him. The only man he trusts. The one man he can never have…

Evil has resided alongside humanity since the beginning of time, feeding on our weaknesses, our vices. Our sins. It hungers for our souls, its demonic offspring possessing humans, corrupting, manipulating, using us as unwitting pawns in a supernatural chess match for the ultimate price: life.

The Crucifixion of Christ saved humanity once. What will it take to save us this time?

Sin Eater 1.1 is approximately 10,000 words or 45 pages, and is the first of seven episodes in the first season of the Sin Eater serial. If you don’t enjoy serials, you can pre-order the full Box Set on Amazon.

For me this book was a bit weird but it pulls you in and holds your attention. You have a small bit of background about him. You see him take on what he is and when he takes on a big one he has issues. You are left going noooooooooo since you need 1.2 to find out what happens next.